Members of the public have been encouraged to participate in the process for naming the historic Loudoun County Courthouse building in downtown Leesburg. The courthouse, constructed in 1895, is located at the southwest corner of the courthouse grounds at the corner of King and Market streets in Leesburg. The county’s Heritage Commission has reviewed the historic significance of the courthouse grounds and developed recommendations, presented to the Board of Supervisors in 2020, on how the county can fully reflect the history of the grounds and Loudoun County.

Comments and submissions were solicited from the public regarding the naming of the courthouse and were accepted through June 24, 2022.

The commission appointed a subcommittee, which worked on the project over a 16-month period. The subcommittee consulted with experts and community members who provided insight and technical assistance, including the Black History Committee of the Friends of the Thomas Balch Library, National Association for the Advancement of Colored People (NAACP), Douglass Alumni, Carver Alumni, and the Loudoun Freedom Center. They also invited experts to conduct a peer review of the historical narrative. 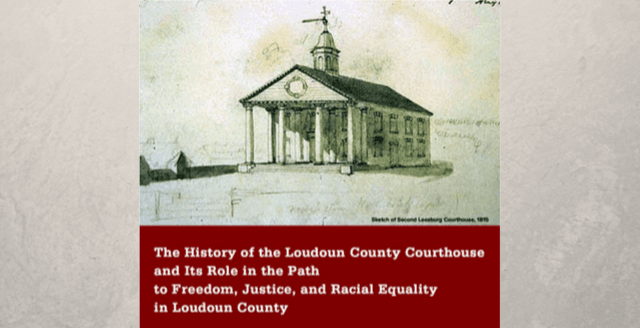 The commission’s scope of work did not include recommendations about any current memorials or statues. Virginia state law, Va. Code § 15.2-1812. Memorials for war veterans, states that it is “unlawful for the authorities of the locality, or any other person or persons, to disturb or interfere with any monuments or memorials…”

On June 4, 2019, the commission presented its research and recommendations to the Board of Supervisors.

At this meeting, the Board accepted the Heritage Commission’s recommendation to publish the historical report developed by members of the commission.

The commission seeks public input on this project on an ongoing basis.
Email the Heritage Commission to provide feedback and share historical resources.

If you have questions about the project, email Heidi Siebentritt in the Department of Planning and Zoning or call 703-777-0246.