History of the Coat of Arms

The Loudoun County Board of Supervisors adopted the county's official coat of arms on January 16, 1968.

The county coat of arms was approved by the College of Arms in London after several years of effort by Supervisor Huntington Harris. Harris first began exploring the possibility of obtaining a coat of arms for Loudoun in 1964, while he was serving as president of the Loudoun County Historical Society. 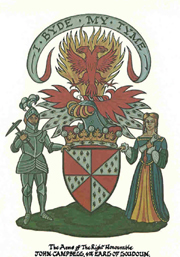 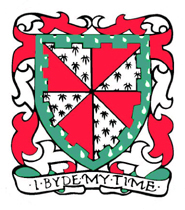 After being informed by the College of Arms that Loudoun County would not be able to use a coat of arms identical to that of the Earl of Loudoun, Harris was able to obtain approval after making a slight change to the motto appearing below the shield - "I Byde My Tyme" - changing the "y" in “tyme” to an "i."

The county celebrated its new coat of arms in March 1968 with a gala event featuring a visit from the Rouge Dragon, an official representative of Queen Elizabeth II.